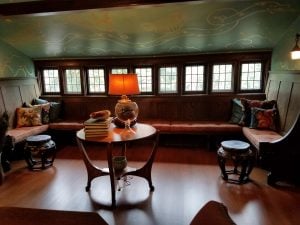 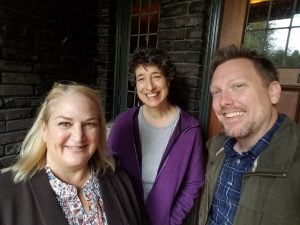 William Bloch commissioned this Capital Hill mansion in 1908. It is stately and was worthy of his status as a local restauranteur that catered to the German immigrant population of early Seattle. He owned and operated Café Germaine located on 2nd and Yesler. He and his wife Louisa entertained many at the stately home near Volunteer Park. Dark clinker brick, half timbers and tudor designs adorn the exteriors. Inside, the house has beautiful wood paneling both quarter-sewn oak and mahogany. The entrance lobby is reached through a vestibule with a built in bench and an arched painted ceiling. The main lobby has a herringbone patterned floor. Large rooms surround the lobby and staircase. In the dining room, a fireplace adorned with original iridescent square tiles is next to built in cabinets, painted ceilings and the original silk chandelier creates an impressive gathering space. A former morning room is now a custom built TV room with bookcases and custom mural paintings. The original floor bell to summon the kitchen staff is still intact in the floor. A study with a cozy fireplace with Batchelder tiles and built in book cases is right off the former parlor.  A former ballroom is located on the third floor and was converted into a library. It combines nooks and small benched alcoves that were originally for the band, and for couples to sit and talk next to a fireplace. The entire ceiling has a custom hand painted mural that replicates the ceiling of NYC’s Grand Central Station. One of the current owners was a lawyer and the library has a distinct feel of a law library. The kitchen has some original features including the exhaust hood over the stove. The master bath has original bath sink, tub and nickel faucets. This house is magnificent, stately and has been lovingly restored and maintained by the current owners. The family of the original Bloch owners still live in the area and gave some original Bloch crest china to the current owners to stay with home as original artifacts of the Bloch family.