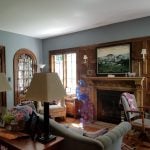 Few houses are grander than the house known as “Laurentide”. Designed in 1924 by Arthur Loveless for the Colman family. Colman as in Colman Dock, Colman Building and Colman Pool at Lincoln Park. A significant early Seattle family. Arthur had an early office listed in the Colman Building and in the 1920’s was hired to renovate the street level retail/bank portion of the Colman building on 1st and Marion. From there, we can only guess that this was the beginning of a long-lasting relationship with Loveless and Colman. Laurentide is located in West Seattle near the Fauntleroy ferry and when it was first built most likely had un-obstructed views of the ferries and Vashon Island. It sits on  near 5 acres hidden from the street with significant gardens and a circular driveway. It is a stucco and wood structure and for all it’s grandeur, has a signature feature of Loveless.. a very unassuming front door.. almost a cottage entry. It is grand on many levels with a huge entry hall with carved wood banisters and paneling, an elevator, a den with Batchelder tiles and built in curved bookcases. Upstairs most bedrooms have fireplaces and the entire top floor was originally for the staff with a back staircase leading to the service areas of the home. Oversized fireplaces, beams and stunning gardens makes this house truly special. The couple who now live in it bought it directly from the descendants of the Colman family who had been trying to sell the property with developers being the most interested parties who clearly had their sites set on developing the land. The Pierce family agreed to sell the property to the current owners with the one caveat of never selling off the land. Lucky for us, they agree in the preservation of this beautiful estate. 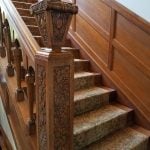