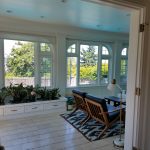 Today was a special day! My photographer and I were invited into another Arthur Loveless home located in the Queen Anne neighborhood.  It was a gracious home with grand spaces clearly built when rooms were to be used and people were welcome. This house is an entertainer’s dream home and I suspect that it was designed with entertaining in mind. The current owners love the home and have been the caretakers since 2015. They love the home and have 3 growing boys. The homeowner described it as “a house where we live, not a museum”.  The homeowner informed us that the past long time resident was a political consultant and helped major candidates prepare for political debates and up and coming politicians have visited the home including Bill Clinton, and Barack Obama and other political figures on the either side of the aisle. This house is perfect for such important visitors.

The house is virtually hidden from the street with mature landscaping and a wrought iron fencing surrounding the house. It has a lovely view of the Olympics and oversees Magnolia. It has a pool and what was once a sun porch has now been incorporated into the home as a finished room. It has tile floor, arched windows and the fireplace is the back-side of the main living room grand fireplace. It was one of my favorite spots because it was so cozy and charming. To select a favorite feature was hard because the house has such wonderful architectural details.  A real treat for us to see.